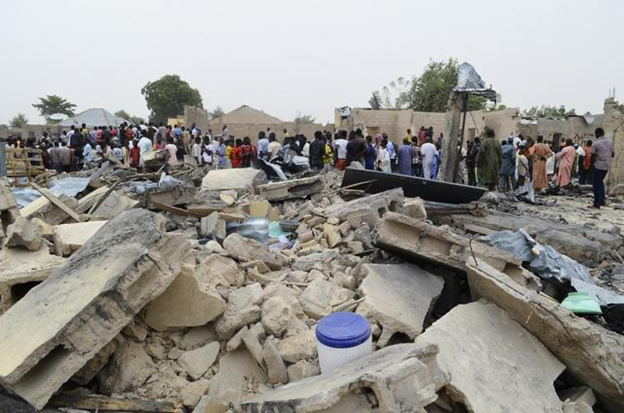 (Human Rights Watch. People gather near rubble after a bomb attack in Maidiguri)

Climate change poses risks to a broad range of human and natural systems (national Research Council, 2011). The issue of climate change affects institutions and people on numerous levels, from local level institutions and society, to individual nations and regional areas, and the international community beyond. Climate change is an international security issue and there could be long-term risks associated with extremist activities around the world, but by studying and understanding the root issues and causes, nations and international communities could battle them in a  more effective way. Climate related issues based around the Lake Chad Basin region have a potential link to Boko Haram added on to the  lack of climate mitigation by federal governments and the Multinational Joint Task Force. The region is one of the most volatile areas in today’s society and provides a good example on how climate change affects local government’s power and furthers the cause of extremist groups like Boko Haram.

The depleting supply of natural resources caused by climate change is not necessarily the sole driving factor that leads to extremism, but instead the lack of good local governance is also a factor that can lead to such issues. The limited resources could encourage people to manage resources better through each other’s cooperations and integration. In spite of the poverty and population growth of the region, the strong but flexible common property regimes governing water helped people adjust to its scarcity. As Hartmann (2010) argued that “in terms of drought and water scarcity, there was actually less violence, not more” (also cited Witsenbury and Roba 2007). To solve the issue of drought, related migration led pastoralists to develop better strategies to manage herds and had positive repercussions on the communities (Hartmann, 2010; Juul, 2005, p.237). Wong and her research team argued that the root cause and drivers of violent extremism is “grievances, limited confidence in governance and the rule of law, rising inequality, a lack of public participation due to rapid social and cultural change, and lack of inclusive development” (Wong, 2020, p.3). Hence, to tackle the mismanagement of the local government, necessary policies should be taken.

In April 2007, the Congolese Representative at the UN Security Council Debate stated, “this will not be the first time people have fought over land, water and resources, but this time it will be on a scale that dwarfs the conflicts of the past” (Parry, n.d). The Lake Chad Basin region, comprising of Nigeria, Niger, Chad, and Cameroon is the setting of the extremist group Boko Haram, a jihahist organization committed to spreading their idea of Islam and Jihad in the area. The violence caused by Boko Haram and the counter-insurgency attempting to stop them has resulted in the death of nearly 30,000 people in the region between 2009 and 2016 (Comolli, 2017). Food insecurity, economic instability, and migration from the area has also risen since the violence has begun, affecting millions (Comolli, 2017). Boko Haram has also used economic and climate change disasters in order to further their support. The group promised young ‘lots of money’ if they were to join (BBC, 2016). Due to climate change affecting Lake Chad, which used to be the largest lake in northern Africa and the main source of food and income for many people, some have even turned to joining Boko Haram in order to survive (InterPress, 2019). Boko Haram’s intentions are harmful on an international scale, as they are linked to other Islamic groups such as ISIS (Hoogendoorn, 2018) and their reach has touched Nigeria, Niger, Chad, and Cameroon (Comolli, 2017).

No action IS an action

With escalations of violence all throughout the 2000s, Boko Haram was majorly defeated after an insurrection attempt, but not permanently. The Goodluck Jonathan led government did not take the resurrection seriously, and by 2013, Boko Haram already had a stranglehold on many states within Nigeria (Hogendoorn, 2018). The military was unsuccessful in its attempt to usurp the group from power even with excessive force such as extrajudicial killings and the burning of homes. This abuse simply boosted the cause for Boko Haram and increased recruitment. Eventually, Boko Haram declared a caliphate in the town of Gwoza and pledged allegiance to the Islamic State (Hogendoorn, 2018).

The Nigerian government did take some steps in order to address climate change as they signed on to the Paris Agreement in 2015 (Dunne, 2020). But as the continent’s second leader in emissions and the expected huge population growth that the country will have by the end of the century, they need to do more (Dunne, 2020). Within the country, state governments have been unengaged and there is no federal oversight body to track climate related issues and changes. The Nigerian government has taken a weaker than needed response to climate change and Boko Haram. This is a direct example of the failures of enacting good governance in order to stop climate change and its related issues, such as extremism.

Suit up, Show up, Shut up

In response to the rise of Boko Haram, the countries of Nigeria, Niger, Chad, and Cameroon, and Benin reactivated the previous inactive Multinational Joint Task Force (MNJTF) under the command of the Lake Chad Basin Commission and mandated by the African Union Peace and Security Council. Based in Chad, the task force also has bases in each of the 3 other Lake Chad Basin region countries as well as financial support from the European Union. The main objectives of the MNJTF include increasing regional cooperation in the goal to restore and secure areas affected by Boko Haram and conduct joint multinational operations. The task force is also investing in the youth and women of the region, such as bettering education, linking skills and education to employment, and unlocking potential via digital technology (AU, n.d).

While noble with their goals, issues do exist with the MNJTF. According to the International Crisis Group, the MNJTF has issues with countries fully committing, issues with overall funding, and disjointed planning which has caused issues with effective results. There was also confusion with the goals of the task force as well as the nation’s reluctance to cede command to the task force. There are also issues with ways the task force deals with captured Boko Haram troops, where many are simply trying to survive (Crisis Group, 2020). This may cause locals to perceive the task as an overloading government power mistreating the youth that was failed by the government. Climate change mitigation and adaptation are also not found within the MNJTF mandate or mission goals, even though it has been seen that climate change is one of the root causes of violent extremism. The focus of the task force is focused mainly on military power to put down Boko Haram, yet they lack the insight and cooperation to tackle one of the root causes of the group.

Different tensions to cause the growth of extremism

UNDP (2021) thinks that increasing “conflicts over natural resources such as land and water, and recruitment into violent extremist groups due to livelihood insecurity and financial incentives” (p.4). That means that the extremism issue is caused by the tension of stealing limited resources among different groups of people in local communities, however, lack of proper management over limited resources and weakened power of local governance are crucial factors to the rise of extremism in the sense of human factor. In the case of the extremism at the Lake Chad Basin region, it is observed that the weakening of the local governance and resource management showed up through three different tensions that happened at the local level. First, the tension between agriculturalists and pastoralists; second, the tension between self-defense groups and violent extremist groups, and last, the tension between local communities and government (Wong, 2020, P.5). The conflicts between agriculturalists and pastoralists had been exacerbated by the national policies prioritizing the former over the later. The national policies could not be fulfilled by the state apparatus. The violent groups emerged among non-native farmers and landowners over land use in order to improve rice production. Those non-native farmers are from Fulse and Mossi ethnic groups. The local government has little to no influence with the enforcement of land when compared to the violent extremist groups who portray themselves as “a more ecologically permissive alternative to the state” (Wong, 2020, P.5) in eastern Burkina Faso. Hence, it is clear that the local government has already lost its power over the limited resources management and also the authority over governing the population.

To encourage solving the issues of the MNJTF an improve on the capabilities of stopping Boko Haram and their use of climate change related issues the Lake Chad Basin region countries should:

This would include creating oversight institutions with individual federal governments to study and record climate change and related issues. It could also include the creation of a Ministry on Climate Change in order to have more federal influence of the matter.

This would build on the oversight institutions or Ministry of Climate Change and include a MNJTF representative from each country within those institutions where climate change information can be shared, studied, and utilized by each group. This would also help to provide more transparent and open communication between each Lake Chad Basin country in order to find a clear goal when setting operations and utilizing climate data.

This would include funding for the creation of the institutions necessary to battle climate change as well as investing in greener technology for the federal government and the MNJTF.

Rooted in the Grass(roots movement)

These recommendations should be considered as a for need basis – as not all places are equally affected by climate change and federally funded money is limited. Focal locations include those where climate change is most harmful and extremism is likely to form, such as areas affected by extreme droughts, desertification, and instability in local governance. By collaborating with local communities, local governments, federal governments, and international governments, the Lake Chad Basin Region may have an opportunity to beat Boko Haram and prevent another from rising.

Lake Chad Basin region countries should further empower local governments and communities to prevent a future rise in extremist groups and improve climate change education and awareness. Also, the MNJTF and federal governments within the Lake Chad Basin region should craft policies and reorganize institutions in order to better handle the issue of climate change and Boko Haram. Not solving these issues right now could hinder the recovery of the region and possibly spread the influence of extremist groups on a global scale. Overall, collaboration between the local government and local community is just as necessary as collaboration between nations, and should be invested in as equals. Extremism is simply one of the many branches caused by the root which is climate change – you can cut down branches, but they will continue to grow back if the infected root stays alive. 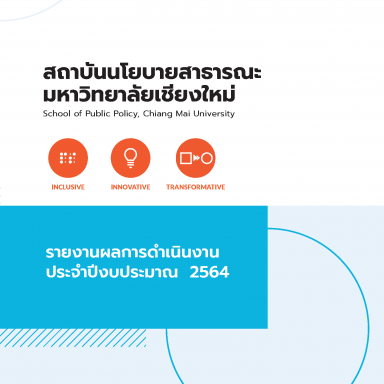 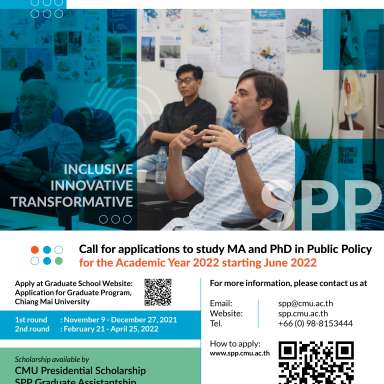 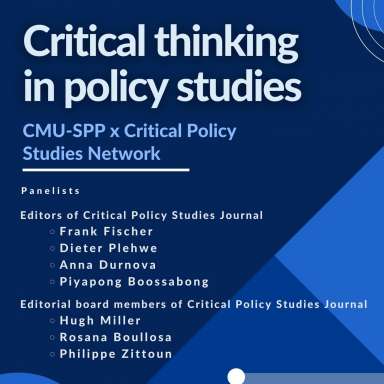 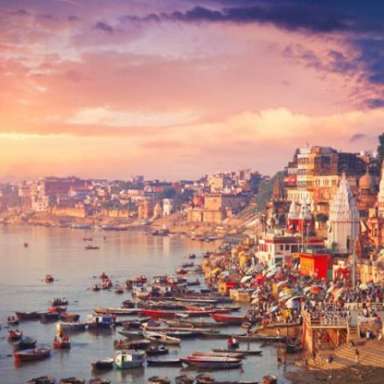